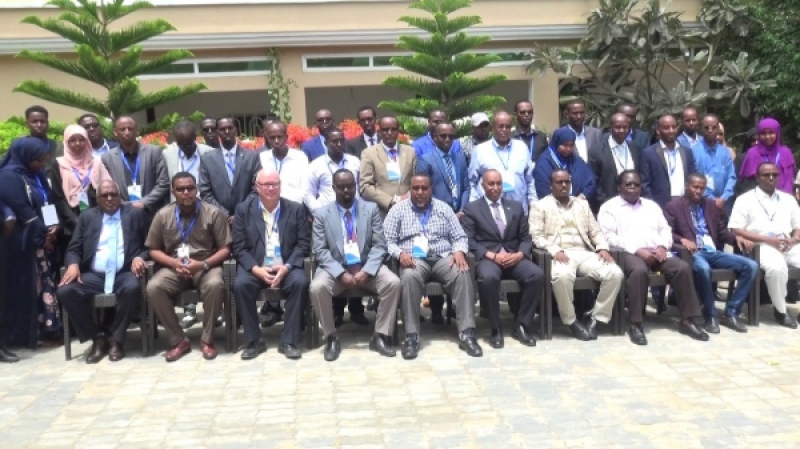 A historic milestone following the hard work of dedicated staff and partners.

The Office of Auditor General Somalia (OAGS) hosted a three-day meeting and stakeholders’ workshop in Mogadishu, Somali from the 26 to 28 August 2019. This was the second year for the annual engagement with key stakeholders. It was preceded by an internal performance review of the OAGs both at the federal level and member states.

The theme of the workshop was to impart knowledge and share experiences about the critical roles played by the Offices of Auditors General in the Federal Republic of Somalia. There were discussions about the adoption of International Standards for Supreme Audit Institutions (ISSAI) with particular reference to the adoption of Compliance Audit Manual (CAM) and Financial Audit Manual (FAM); the importance of strategic planning and its implementation; and building human resources for efficient and effective audits. There were several thematic areas covered during the workshop.  Areas covered among others were:- (a) developing human resources for an SAI; (b) business integrity and ethical standards; (c) review of the 3-Year Strategic Plan (2017-2020); (d) share experiences gained in  conducting audits in 2019; (e) considered opportunities for greater collaboration between the Federal SAI and OAGs of the FMS; and (f) present a performance report to external stakeholders.

At the meeting the Auditor-General Mohamed Mohamud Ali briefly talked about four main points, namely: (a) the need for qualified and professional audit staff; (b) the current office renovation and re-equipment; (c) adoption of new audit methodology based on ISSAI for both compliance and financial audits; and (d) the new for a new audit law.

He informed the audience about the progress with the new audit bill. The Federal Audit Bill has passed the Lower House of Parliament and now is currently with the Upper House. He expressed hope that the new audit law is based on INTOSAI standards, the internationally recognized standards for supreme audit institutions, and gets presidential approval to become law.

The AG presented to the audience the progress made by the office since the start of the current Strategic Plan. He also talked about the new audit methodology, based on ISSAI, which the office has recently adopted.

Lastly, the Deputy of the Prime Minister of Federal Government of Somalia Mr Mahdi Mohamed Gulled closed the meeting where he talked about the significance of such a meeting and discussion has the public and provides their comments towards the tasks the OAGS do. He also notified that the office should re-double their efforts to ensure transparency and accountability in government entities.

IDI is together with AFROSAI-E and the peer-partners SAI Botswana, SAI Ethiopia and SAI Uganda supporting OAGS to implement strategic priorities for auditing, internal governance and independence. Financial support is provided by the Ministry of Foreign Affairs, Norway.

Hiiraan News "The annual conference focuses on strengthening good relations and cooperation between the offices and exchanging expertise and knowledge with the Audit Office."

Putland News 24 "We declare beforehand that the auditors will not have any differences at the federal and state level, we have one recommendation, one vision and one objective, based on that. the establishment of a common nation” said Hashi Osman Mohamed.

FaceBook A conference on strengthening the quality of the federal government offices and regional governments.